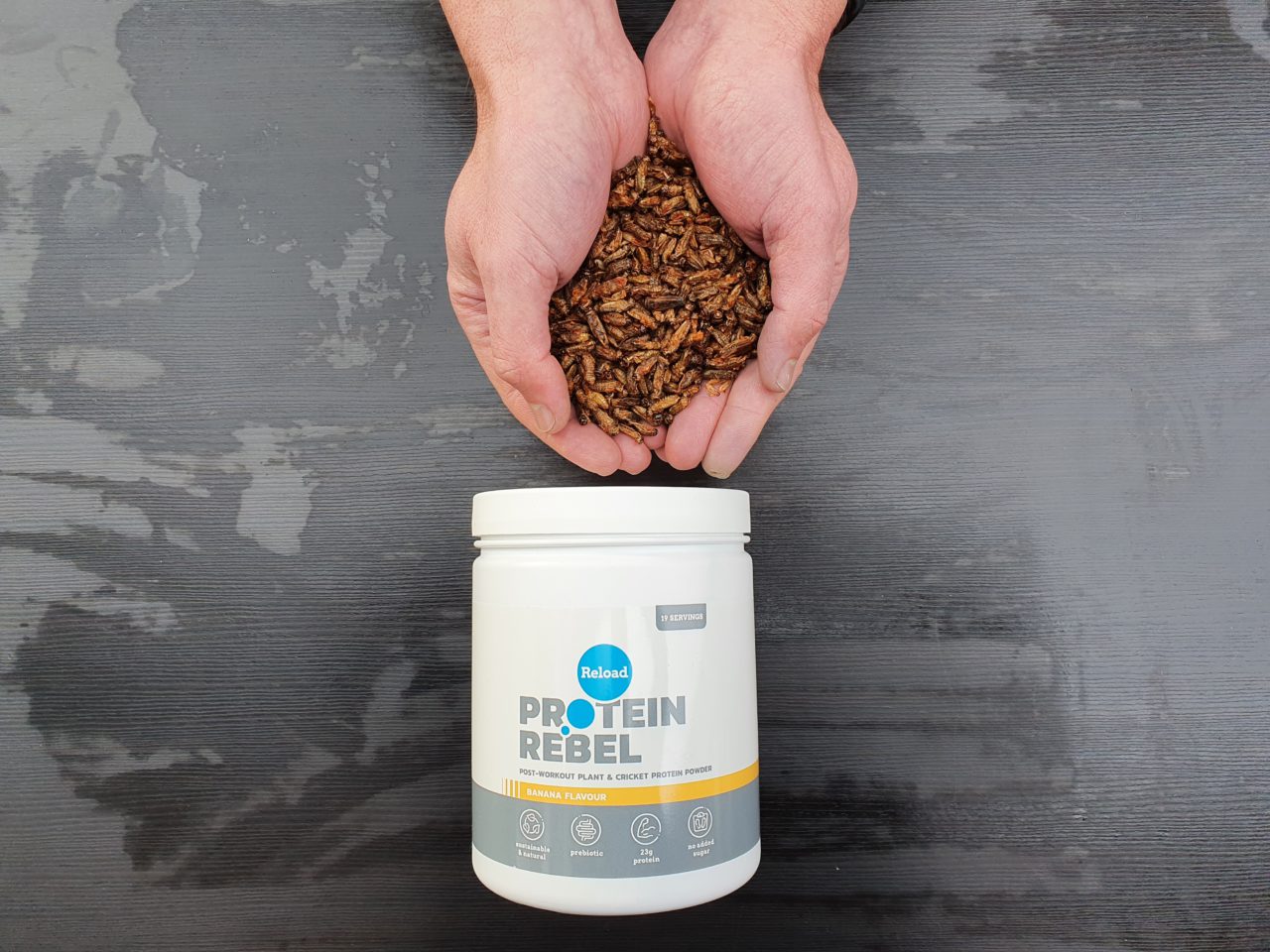 We are reviewing key protein powder ingredients and looking at crickets in this blog.

Cricket protein is new to the market with Protein Rebel creating the first (maybe) sport nutrition powder using crickets in the UK. Given the lack of awareness of this superfood why go to the bother of using crickets? Quite simply we believe they are a protein of the future.

What crickets can do for you…

Crickets are eaten as part of the everyday diet in south east Asia. If you have been on holiday in Thailand, you are likely to have seen a variety of insects sold as street food. The key cricket species used for human consumption is the house cricket (Acheta domesticus). Originally from south east Asia, they are now farmed for commercial food consumption in North America and Europe.

To suit Western tastes and improve convenience, most crickets are processed to turn them into cricket flour. This fine powder is then added to foods to increase the nutritional content as they are a great superfood supplement.

What makes them a superfood?

Superfoods are defined by the Oxford English Dictionary as, “a nutrient-rich food considered to be especially beneficial for health and well-being.” Crickets are right up there with kale, goji berries and turmeric. They maybe small but they pack a powerful nutritional punch as they are:

Rich in protein and essential amino acids. Crickets naturally have between 65% to 69% content of complete protein, meaning they contain all the essential amino acids that the body cannot produce. This means crickets have a protein content higher than chicken, beef, pork or salmon.

High in Iron: This is split into haem iron and non-haem iron. Haem iron is only present in animals (including insects) and is more easily absorbed than non-haem iron. You want that one. What’s more crickets have 168mg of iron per 100g which is more than spinach (3.6mg per 100g). Watch out Popeye!

Vit B12: this is an important vitamin than can be hard to find as it is only produced in animal products. Crickets are stacked full of Vitamin B12 with 23μg per 100g which is with more than beef (6.2μg per 100g).

Antioxidant activity: This is the measurement of free radicals scavenging ability to prevent, protect or delay against oxidisation in other compounds. Researchers have found that crickets have 5 times as much antioxidant capacity as orange juice. Good stuff!

Prebiotic: this is different from probiotic and not a spelling mistake. Prebiotic is food for the good bugs in your gut. Our modern lifestyles see us consume too much food (e.g. take away, alcohol, fast food) for the bad bugs in our gut which outgrow the good bugs. This can then cause stomach discomfort, bloating and other issues. Crickets are full of prebiotic fibre which helps your good bugs grow. Well done crickets!

Trace vitamins and minerals: these are vital components for metabolizes nutrients, maintaining your immune system, growing and repairing body tissue as well as ensuring general connectivity between cells. Insects have been found to be good sources of many of these particularly zinc, copper, magnesium and manganese. 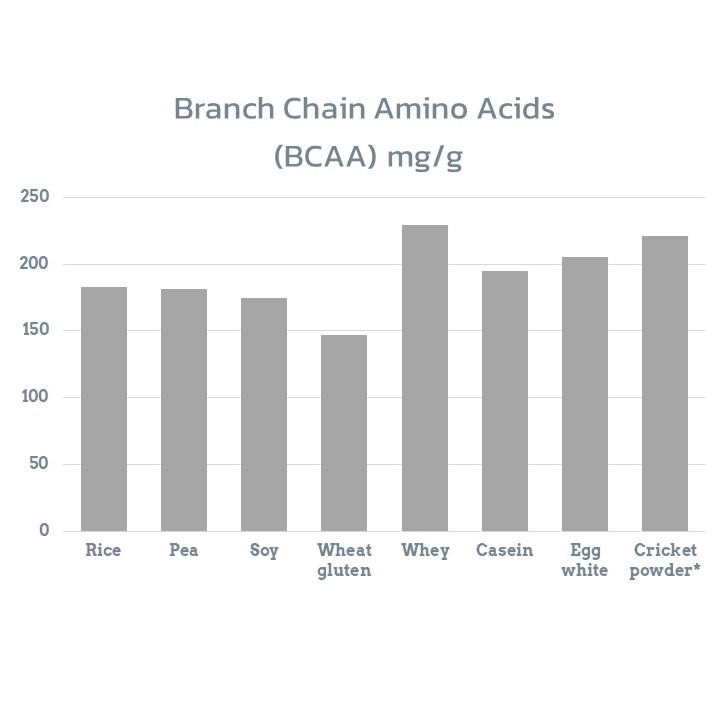 High in BCAA: as well as being high in protein, crickets have a high level of Branch Chain Amino Acids (BCAA). These are the building blocks of protein and are classed as being essential. This means we cannot produce them in our bodies and need to adsorb them through our food. BCAA are highly regarded as they have been identified as the key amino acids which support the rebuilding and strengthening of muscle fibres after exercise. The chart above shows they are second only to whey in BCAA content but without the stomach issues associated with whey. Win, win!

How effective is cricket protein at building muscle mass compared to whey?

This is probably the key question on your mind. It is clear that they have a lot of good things going for them but will cricket protein work better than whey? As with any functional food this is a complex question to provide a robust answer to. However, the indications are good. We can see that cricket powder has only slightly less BCAA than whey but to measure its effectiveness we need to know 1. How easy is it to digest? 2. Does it reach your muscles?

We have been working hard with one of the premier gut research companies in the UK to answer the first question. Aelius Biotech is a research organisation that specialises in modelling the human digestive tract ethically. Its scientists use world-leading laboratory gut models to measure and assess digestibility of food of the future.

We started working together in June and have recently concluded the first round of research comparing the digestion of whey and cricket powder (see graph below). 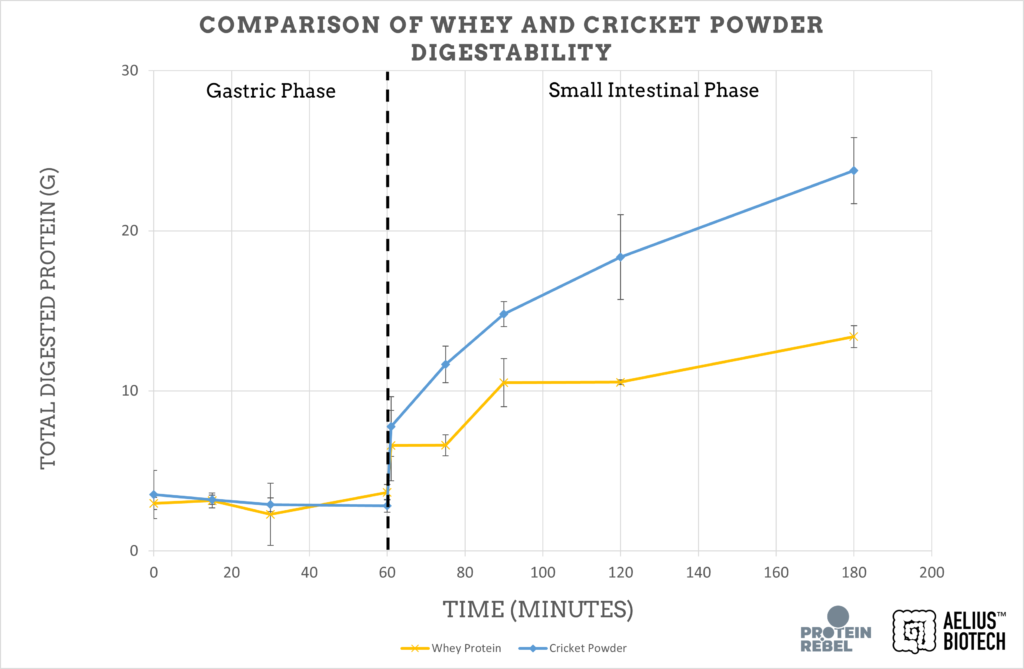 The research has demonstrated that the digestibility of powdered crickets in a small intestinal model is over 50 per cent higher than a standard whey protein. This statistically significant research suggests that cricket protein may be more effective at delivering the amino acids required for muscle growth than whey protein, which for over 20 years has been regarded as the best protein for muscle building due to its fast digestion and complete amino acid profile. Peter Chater, Co-Founder and CEO of Aelius Biotech says,

“In our tests we showed faster and higher rates of protein digestion with the cricket powder as compared to whey protein. Proteins must be broken up into their ‘building blocks’ so that they can be absorbed and used for muscle protein synthesis and muscle growth.”

“This is a promising first step in determining the effectiveness of cricket protein. Digestion and amino acid absorption are some of the key determinants of a protein’s ability to stimulate muscle protein synthesis and this data would suggest that cricket protein has the potential to rival whey. I’m excited to see the results of future peer-reviewed studies on real people.”

This is significant stuff!

Whilst you might think it is just their nutritional qualities that make them a superfood, their sustainability credentials are like no other. They have a very low environmental footprint and beat other animal protein sources hands down.

The United Nations says the use of insect protein, such as cricket flour, could be critical in feeding the growing population of the planet while being less damaging to the environment. Why do they say that?

To produce 1kg of protein using cricket compared to beef, chicken and pork requires much less of everything:

And that’s because the food conversion efficiency of crickets is 15 to 20 times higher than beef cattle.

So, when you look at all the evidence there is a lot to love. They are good for you and good for the planet. But what about the taste? Crickets are described as having a mild and nutty taste that easily carries flavours. This means you can mix them with anything and they will taste great. That is exactly what we have done.

Check out our Reload page to buy

And if you are looking for some more inspiration, this MasterChef video shows you what can be done with crickets. They are tasty!