Maple Ignite – energy gel upgraded. Sign up for updates on our Kickstarter launch 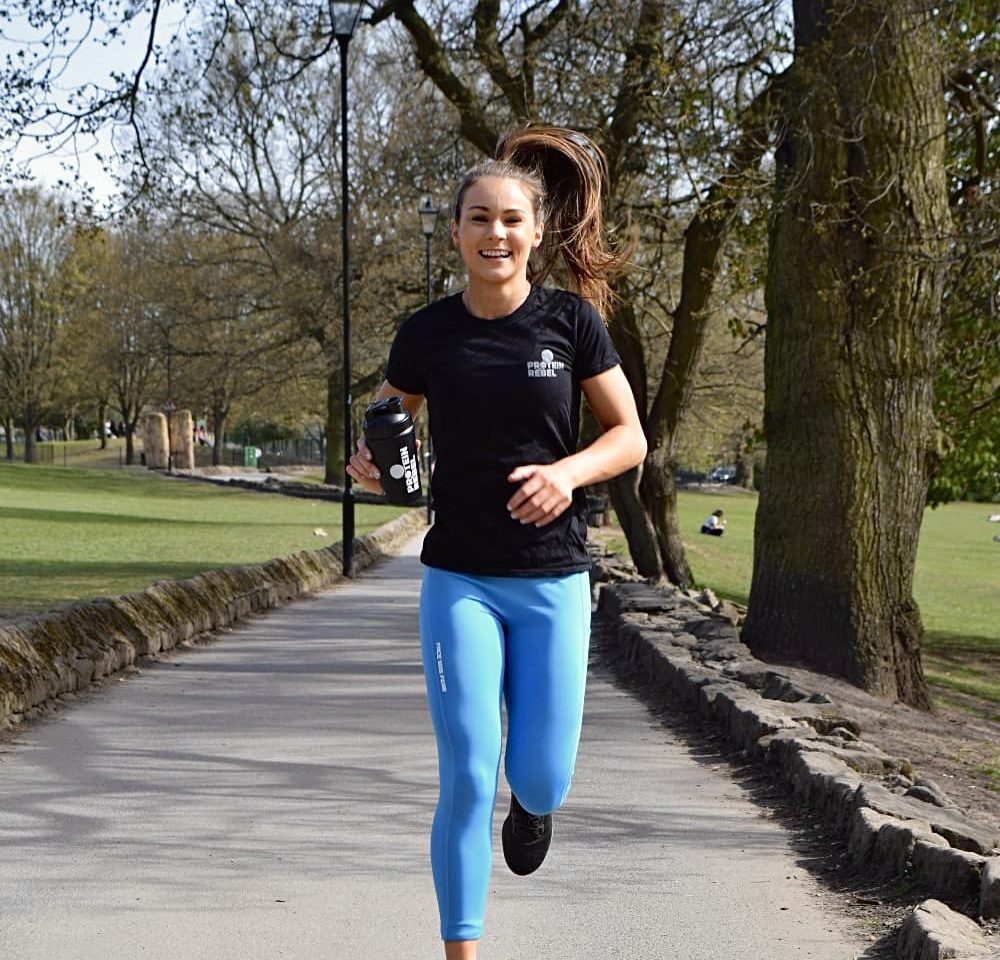 Michelle is a running coach and fan of Protein Rebel. She shares her Top 10 tips for better running below.

While you may not necessarily want to train yourself to run faster, your body will naturally run more efficiently the faster you push it. Try it – increase your speed and you’ll see that your posture naturally straightens up, your arms begin to move, and your stride length naturally increases as your feet spend less time on the ground and more time in the air. The more you practice running faster, the more efficient a runner you will become. Introduce speedwork carefully if you’ve never tried it before – start with an unstructured fartlek session once a week where you run efforts of varying speed and distance between lamp-posts or trees, and progress onto more structured interval sessions as you gain experience and confidence. Short repetitions of fast running combined with longer recovery intervals can help boost our anaerobic system – which helps us accelerate off a race start line and overtake competitors – and train our bodies to deal better with the fatigue that using our anaerobic system can cause.

Short hill reps of up to around 60 seconds are also excellent for encouraging a more efficient running form, and create a similar adaptation in the body that short interval sessions do. Hill sprints bring power to your running, as they are effectively resistance training; you versus the hill. If you’ve never tried running up hills before, start by including a few minutes of uphill running into some of your runs, or try some short hill repetitions with recoveries (jogging, walking or standing) that are around 2 to 3 times the length of the uphill effort.

Tempo runs are speedwork, aren’t they? No. Tempo runs are probably the running session which tends to confuse most runners. The pace of your tempo run depends on your goal really, but it is not a session that should be done at a hard intensity. Its purpose is to train your body to run at a sustained effort. Rather than go out and attempt to run 5 miles at a hard pace, it can be better to incorporate 5-10 minutes of tempo intervals into your runs, with the opportunity to have some easier running in between where you can reassess your effort level and adjust if necessary. Same adaptations, but less energy output.

Even if you’re training for a 5k, it can be useful to include a weekly long run of at least 90 minutes to help develop your aerobic fitness. If you’re not used to running for this long, take care building up to this slowly, by adding 5-10 minutes onto your longest run each week. Be careful not to run this too fast either – the key is running at an easy intensity so you can get the most out of your other sessions dedicated to increasing your speed.

You get better at running by the adaptations you make while you’re resting, not during the training itself. Let me say that again: it’s not the training which makes you a better runner, it’s enabling your body to repair those microtears you make to your muscles while training which will force adaptations, so rest days and sleep are crucially important to becoming a better runner. Without proper recovery, you risk, at best, plateauing, and at worst, injury through overtraining so take your recovery seriously. Take on board the right fuel after a workout (see point 6), aim for at least 8 hours of good quality sleep every night, factor in easier workouts between the harder ones, and include some rest days.

Make sure you eat all the food groups. A high protein diet will repair the muscle fibres you have broken during training while carbohydrates are the main fuel that powers shorter, faster running. Taken together they have a multiplier effect. Fats are important too, especially for lower intensity, and longer, runs. Don’t forget to stay hydrated too – especially important in the heat when you will also need to think about keeping your electrolytes topped up.

Injury prevention is better than injury rehabilitation but many runners often don’t incorporate strength training until it’s too late. You can reduce the likelihood of injury by including a small amount of strength training into your routine, and it doesn’t have to be complicated – the simpler, the better. Include exercises which help improve balance, core strength, mobility, to help contribute towards your running efficiency, such as squats, lunges, step-ups, single leg work, and exercises which target the core such as the plank.

Drills are exaggerated movements which emphasise elements of the running motion in isolation, Drill such as high knees, skipping, hopping, and fast feet (for increased cadence) can help improve our running economy through repetition of a learned movement, improve our mobility and range of motion, and strengthen the muscles used, so it’s worth scheduling drills in either as part of a warm up, or as a standalone session once a week. Plyometrics are movements which incorporate jumps, and are important for building explosive strength which will translate into less time on the ground, through a longer, more energy-efficient, stride.

If you are constantly increasing your distance each week, and adding sessions that increase in difficulty, without taking a break, you could be at risk of both physical and mental burnout. Try to factor in an easier week every 3-4 weeks (remember recovery is crucial to becoming a better runner) and aim to have some downtime every 5-6 months, away from a training plan, just enjoying your running – or even not running, if the mood so takes you. Just like a holiday, you’ll return feeling refreshed and ready to tackle the next goal.

We’ve all heard the saying that comparison is the thief of joy, but it can also cause us to overtrain. With many athletes using fitness apps to track their runs, it can be tempting to want to run faster than we should so that it looks better when we share our run online, or to chase a Strava segment when we had planned an easier run. Whilst competition can drive us to some of our best performances, we need to use it wisely and remember to train within our own abilities, and always listen to our bodies.